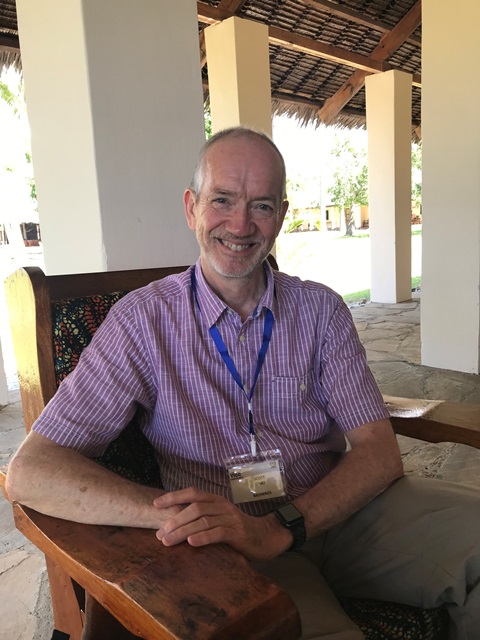 Health communication is an important part of LHL International strategy to stop the spread of tuberculosis (TB). My main objective was to raise awareness on the importance of communicating well with patients. As TB is an infectious disease that goes hand in hand with stigma, fear and misconception health workers can learn how to overcome these barriers by knowing how to establish trust with the patient, ensuring that the patient understands and remembers the information they give about the disease and treatment, and finding out the patient's motivation to adhere to the treatment and be cured.

Scott was in the audience the day I presented, and as I recall, he was sitting on the second row. He approached me after my presentation, saying he enjoyed the content and how I presented it. We chatted a while and then he told me had suffered from TB some years ago. A white, middle-aged man, British, with warm eyes and smiles. A well-educated man, so an atypical TB patient. But he had been in Africa, in 1984 in the poorest of the poor placements, working 3 months in a public health program doing his PhD field work in anthropology and environmental health at a refugee camp in Eritrea at the border of Sudan. In this area, diseases like malaria and TB are common.

I asked him if he would let me interview him about his experience of being sick with TB. He seemed a bit startled before he accepted with a smile, I have never talked about my TB before. We agreed to meet the following day

It was as if you were speaking directly to me yesterday

Sitting down in the big, deep and nice chairs outside on the terrace at Tanga center I invite Scott to share,  So you had TB, can you  tell about when you got sick with TB and how you coped with it? Scott looks at me through his glasses and says, I didn't know that your presentation would speak so directly to my own situation yesterday. You took me back, bringing all the memories back of how sick I was, and how fortunate I was in spite of it all. I could have died, this is how seriously sick I was.

I got sick when I was in the USA, working in a laboratory. This was a couple of years after I had first been in Eritrea. One day at work, I suddenly felt very dizzy and I went to the washroom hoping it would soon pass. But it didn’t. In addition I started to sweat excessively, and it didn’t stop. I think I was in that washroom for an hour before a colleague came in looking for me, and he called 911. Then I fainted. I was rushed to the hospital. Luckily for me, it was a US doctor on duty this day who had served in Vietnam and specialised in tropical diseases. After running several tests, he found that I had cerebral malaria. My fever was very high and for the next three days I was more or less unconscious while I was in intensive care in the isolation ward. But they had found more. They had taken x-ray of my lungs and this showed I also had active tuberculosis in my lungs.

As TB is an infectious disease, they put me in isolation. It was strange to be isolated for many days. For me it was important that the staff that came to my room expressed empathy, talking to me, touching my arm and showing care. Scott blinks and pauses.

I let him sit in silence before I ask, What was your reaction when you heard that you also had TB? He thinks for a while and replies, the cost of the treatment. This was USA, not home in England. I thought that I was lucky to be alive and receiving good care, but that this treatment might ruin me. So when I found out that I was covered through my insurance I was very relieved.

I have never talked about this before to anyone, and so now this memory comes back, Scott reflects, and I become emotional. Scott dries his eyes and looks away. Again, I let him sit and feel the emotion of this memory that he has put aside for so many years – and how it triggered memories of his grandfather’s and aunt’s deaths from TB, and how his own mother nursed them in their final stages.

I have great respect for my mother!

Do you know where you could have been infected by TB? Hmm… that is so funny you ask. I always thought it was a genetic disease. Till now, today. Because of what my mother told me, that my family members had suffered and died from TB. But now I know it is an infectious disease, and I probably caught it in the refugee camp in Eritrea.

Tell me about your family, who had TB and died from it? My TB made me connect with family members I never met. When I told my mother that I had been so sick and had TB, she told me something that  was new to me. Her father, my grandfather, whom I never met, died of TB in 1932, when he was 44 years old, and so did her sister, my aunt, in 1942 when she was 24 years old. She told me that my aunt had coughed a lot, and finally she started coughing blood. She died of haemorrhage. And my mother tended for both of them while they were sick and bedridden. And that made me remember how much human care meant to me when I was sick in a foreign country all alone. Thinking of that, my mother is my hero. Even her brother, my uncle, got TB but he was cured during his stay in a sanatorium. But my mother, who cared for my aunt and my grandfather till they died, was never infected.

I realised during the presentation that the care, a touch, a smile and people talking to me, was so important and gave so much comfort while I was sick and hospitalised. I feel that care and love is as much a key to successful treatment as medication. That is why I enjoyed your presentation on health communication so much. I had that experience and I know how important it is when you are afraid and isolated with a potentially deadly disease, to manage both the social and the medical aspects. He pauses and reflects back. And I remember how I was craving toast and marmalade, Scott laughs.

At the end of the interview I was curious about one more thing, What did the doctor in America tell you about TB before you were discharged?  Scott replies that he was told to show the x-ray picture to the doctor in England and to do another test after 2 years. And to stop smoking pipe, stay healthy and eat nutritious food. And to remember that TB is treatable.