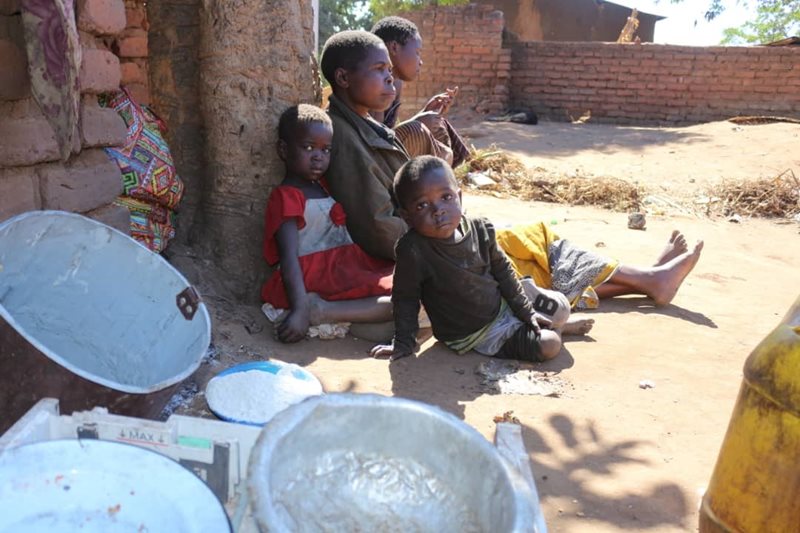 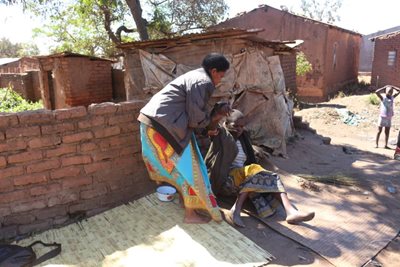 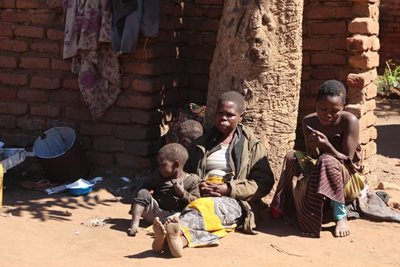 The woman leaning on the tree is 56 years old Elifa Joseph. She has recently been diagnosed with HIV and TB with the support of Paradiso Ngwenya TB club volunteers.

Elifa had been feeling ill for a long time, but her household members and community were too afraid of her illness, they shied away from her and did not take her to seek care. Elifa just got worse, and when Paradiso heard about her situation, they visited her house and decided immediately to take her to the hospital.

After returning home from the hospital in Lilongwe, where she had started treatment for both HIV and TB, she felt a bit better. However, the family members and community continues to discriminate against her and her siblings even more. There was no support coming to her from relatives, and as can be seen from the photo, Elifa lives in a dilapidated house, with very few belongings. She could not even manage food for her children and grandchildren. Looking at such challenges, Paradiso TB Patients Trust through Ngwenya TB club took up the responsibilities of taking care of the patient and her family, supporting her with food, transport to the hospital, clothes, groceries, blanket and school uniform for the children.

Paradiso decided to also address the issue of stigma and discrimination in this particular community. They wanted to avoid that what happened to Elifa would continue to happen with other community members that fell ill with HIV and TB.

Ngwenya TB club therefore organized a community meeting to sensitize them about HIV and TB, and about the dangers and effects of stigma and discrimination to the life of patients as well as their family. The same meeting targeted the household where the patient came from. After a lengthy discussion and counselling, the relatives through the elder sister of the patient understood with remorse, and agreed to reintegrate her into their household. She also plead that Paradiso continued to support her with food items because the household could afford to feed her as well as all the children and grandchildren. Paradiso is therefore continuing to support Elifa and her children with food items and other necessary items, and they are doing well. Paradiso will also help her to fix her house after parts of it collapsed during the rainy season. The woman who once gave up on her life is now feeling much better with the treatment from the hospital and the care and support she is getting from Paradiso and relatives.

Whenever Paradiso identifies a TB patient in a household, they also check the household members for symptoms of the disease. In Elifas household, they found one more person with TB.  The family could now see how important it is to not stigmatize people who are sick, but instead take them to the hospital. The entire community have now learnt their lesson and changed their mindset about stigma and discrimination against people with TB and HIV.

Trenji, a TB club volunteer is helping Elifa to stand up during one her routine supportive visits.